We have much to celebrate despite the collective grief we’ve experienced over the past two years. We watched the twin pandemics of COVID-19 and racial unrest change the world right before our eyes. But we never lost sight of each other as a community, or our vision of an equitable Boston. In fact, that vision came into finer focus as we continued to serve our city’s youth, youth workers, and youth-serving organizations throughout the pandemics — learning, building, and adapting as an organization.  Because history has taught us that we, as people and as a community, heal through action every day however big, small, active, or still.

This year, our 15th annual Bostonians for Youth gala will celebrate our collective vision for an equitable Boston, focusing on Healing Through Action as our theme and clarion call. Trinity Boston Connects acts along three healing pathways – youth development, clinical care, and organizational change — to benefit all involved in the systems supporting our youth of color in Boston.

Our guest, volunteer, and staff safety is of utmost importance to us.  In conjunction with the hotel, we will have appropriate protocol in place with the goal of keeping our guests as safe as possible during the gala. To learn more about the extensive measures the Fairmont Copley Plaza is taking to safeguard, protect and care for guests, please visit ALLSafeandWell.com. 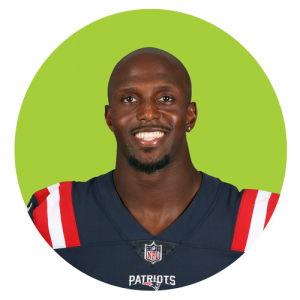 The Leader of Change Award recognizes an individual who is making deep impact in helping to create a more just and equitable Boston through critical and sustainable change. We are thrilled to honor New England Patriots defensive back, 11-time defensive captain and three-time Super Bowl Champion, Devin McCourty as our 2022 Leader of Change Award recipient. In addition to his athletic accolades, Devin has positively influenced the internal culture of the Patriots organization while also making sustainable impact on social justice and racial equity issues at the federal, state, and local levels.

In July 2018, Devin and his brother Jason co-authored a Medium piece about the disparities in educational funding. Devin wanted to address this issue and advocate for a bill that would provide critical funding to improve literacy rates for children across Massachusetts, particularly students who are economically disadvantaged and/or those who speak English as a second language. Thanks in part to Devin’s advocacy, the Student Opportunity Act passed in 2019 and provided more than $1.5 billion in funding to underserved public schools in Massachusetts.

In 2020 Patriots Head Coach Bill Belichick said of McCourty’s leadership within the organization, “Healthy discussions lead to actions – and actions that you have brought to the forefront have resulted in progress.” That progress included Devin and his teammates forming the Patriots Players Social Justice Fund to collectively provide support for organizations focused on social justice and racial equality, including in the areas of education, economic development, police relations, and criminal justice. Since January 2019, McCourty, and his fellow Patriots players, together with matching funds from the Kraft family, have donated nearly $2.0 million to local organizations through this annual Fund.

Join us in-person this year for an evening of inspiration, activation, and community!

THANK YOU TO our sponsors

William Kieffer and James May

Trinity Church in the City of Boston

Boston After School & Beyond